St John’s church dates from about 1165. Originally it was one of two chapels on the west bank of the Severn, the other being at Lower Wick (the remains of which -- St Cuthbert’s -- can be found in the farm buildings behind the Manor Farm eatery). By 1371, after the Black Death, it was decided to close the Lower Wick church (which had, for a short while been the parish church) as it was in a neglected state and very poorly attended. On the other hand, St John’s was a flourishing community near the bridgehead where the drove roads out of mid-Wales converged, and since 1287 had been the place where the vicar lived. St John’s was made the parish church on February 17th 1372. 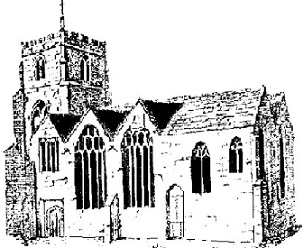 An engraving of the Church circa 1790

The church building is of some interest as the comparable city churches of Worcester were nearly all rebuilt in the 18th century -- so St John’s is the only one today that gives some impression of what the features of a ‘town’ church in Worcester might have been.
The oldest part is the Norman arcade on the North side of the nave (i.e. left hand side, from the back), these grey pillars are the only surviving part of the original 1165 chapel; the arches above them are Victorian, cut much higher to allow those sitting in the erstwhile side gallery to see better. What we term the Lady Chapel today was originally a chapel for the people of Lower Wick, and housed a statue of St Cuthbert which was a popular focus of local devotion and pilgrimage; it was built, perhaps, to compensate for the loss of St Cuthbert’s at Lower Wick. The South Aisle, with its large windows, was added shortly afterwards. Originally it was divided from the Nave with parclose screens (if you look carefully you can see how some of the stonework on the pillars has been carved to ‘marry’ with the wooden screens); each window had an altar beneath it, and these were chantry chapels, with priests other than the vicar retained to celebrate daily masses for the souls of wealthy patrons. The North side of the church had chantries as well, and one pillar has a hagioscope (or squint) cut right through it as a window for the chantry priest, so that he could see the vicar celebrating the parish mass at the High Altar and time his own accordingly. The tower was built in about 1481, and apart from leaning slightly backwards once carried a ‘lofty leaden steeple’ which was shot off by cannon fire during the Civil War. The church suffered very badly during the Civil War, being plundered and set on fire; Parliament granted £80 towards its repair at the Restoration. The 19th century saw the church extended, first with the building of a new and spacious North Aisle, Vestry and Porch, and then with the extension of the Chancel and organ chamber -- which work meant that the Vicarage had to be largely demolished and re-sited, although the oldest part of that building (dated about 1600) survived and is still in use as our Parish Office

October News From the Clergy

The mercury was nudging 50 degrees centigrade, or would have ... more